2 weeks ago 0 1 min read
We use cookies to provide a personalized experience for our users. By continuing to browse this site, you give consent for cookies to be used.
Got it!
Home > Politics > Ottawa Votes 2022 > Young campaigners in municipal election ‘step up’ for change 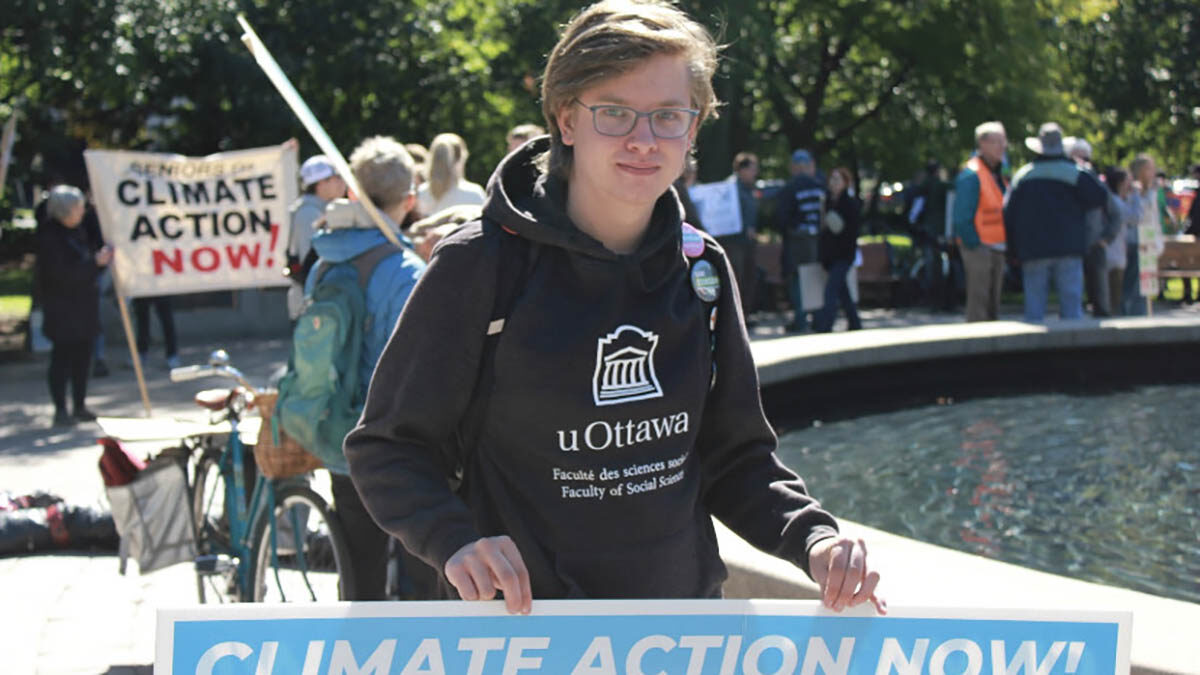 James Adair, 19, is spending this campaign season volunteering for three different candidates. He says he has seen high levels of engagement and has met some campaign volunteers who can’t even vote yet. [Photo courtesy of Ethan Smith-Johnson]
Before You Vote

Young campaigners in municipal election ‘step up’ for change

Despite a full slate of classes, exams and assignments, University of Ottawa political science student James Adair has made time this fall to volunteer on three separate campaigns for city council.

The 19 year old volunteered with Shawn Menard, Laura Shantz and Ariel Troster because he realized “if I wanted there to be change, I had to step up.”

While candidates get ready for the final stretch of Ottawa’s municipal election race, so are the volunteers who have worked behind the scenes. Like Adair, many decided that getting involved was the only way to make a difference in their community.

Erin Tolley, an associate professor of political science at Carleton University, referred to volunteers as “a campaign’s very lifeblood.”

“Voters have very little information about each of the candidates, and it’s through door-knocking, pamphlet drops and phone-banking that voters learn … nearly all of this work is done by volunteers,” she said via email.

Alexandra, another student volunteer, was recently camped out on the staircase in Carleton’s Residence Commons building, hoping to catch hungry students headed to the cafeteria before the advanced polls closed at 8 p.m on Oct. 14.

Alexandra, who asked for her last name not to be published, is helping Capital Ward candidate Shawn Menard.

The third-year commerce student at Carleton University said she started volunteering because she “felt let down by a lot of politicians who didn’t seem to care for students,” and their needs.

This is her first campaign and it has allowed her to “feel like I could make immediate change in my community.”

Teacher Stefania Diaz, 28, is also a new volunteer this election. She said she wanted “to have a more active role in the decisions being made for our communities,” specifically in terms of environmentalism.

Diaz decided to work for mayoral candidate Nour Kadri’s campaign during a debate where she asked a question about about environmentalism.

“I connected with Nour’s answer,” she said, adding that she approached him afterwards to discuss his campaign.

Nelson Mahmoudi, 22, started working on campaigns in 2014 when he was 13. Working with council candidate Lori Stinson in Orléans West-Innes is his 15th campaign.

“I try to volunteer for at least one every election,” the recent University of Ottawa graduate said while driving around Ottawa in his parents’ car putting up last minute lawn signs.

Michele (Mick) Mariani, 20, is mayoral candidate Mark Sutcliffe’s executive assistant and had previously worked on the last provincial campaign of Jeremy Roberts, the Progressive Conservative MPP for Ottawa-West Nepean. Mariani had been following Sutcliffe’s journalism career and was excited to get involved when Sutcliffe announced he was running.

Many of the volunteers said the most important issues in the campaign for young people are affordable housing and transit.

“Everyone is looking for a place to live that makes it easy to get around,” Mahmoudi said.

Two volunteers noted the absence of political parties in the municipal election has helped them connect with people while canvassing. “People are more likely to hear you out,” Adair said.

Mahmoudi said the non-partisan nature of the race is “the best part” about municipal politics. “I feel like I’m actually advocating for something that I agree with rather than advocating for a party,” he said.

A common sentiment among the volunteers was the emphasis on how getting involved allows young people to see immediate change in their community.

“If you don’t go out and vote it’s a wasted opportunity for your voice to be heard,” Mariani said.

Diaz echoed this sentiment when she said, “Who we elect as the person who’s going to lead this city … is something I don’t think should be taken lightly.”

Mahmoudi said he hoped this election would make people understand the importance of municipal politics.

“They think that municipal politics is the boring table where old white people sit around and discuss parking and what Linda on the corner is saying but it’s not just that, it’s so much more.”

Correction: the word little was missing from paragraph five