2 days ago 0 4 min read
We use cookies to provide a personalized experience for our users. By continuing to browse this site, you give consent for cookies to be used.
Got it!
Home > News > Social Issues > Young socialists plan to ‘Fightback’ for radical change amid frustrating state of post-election Canada 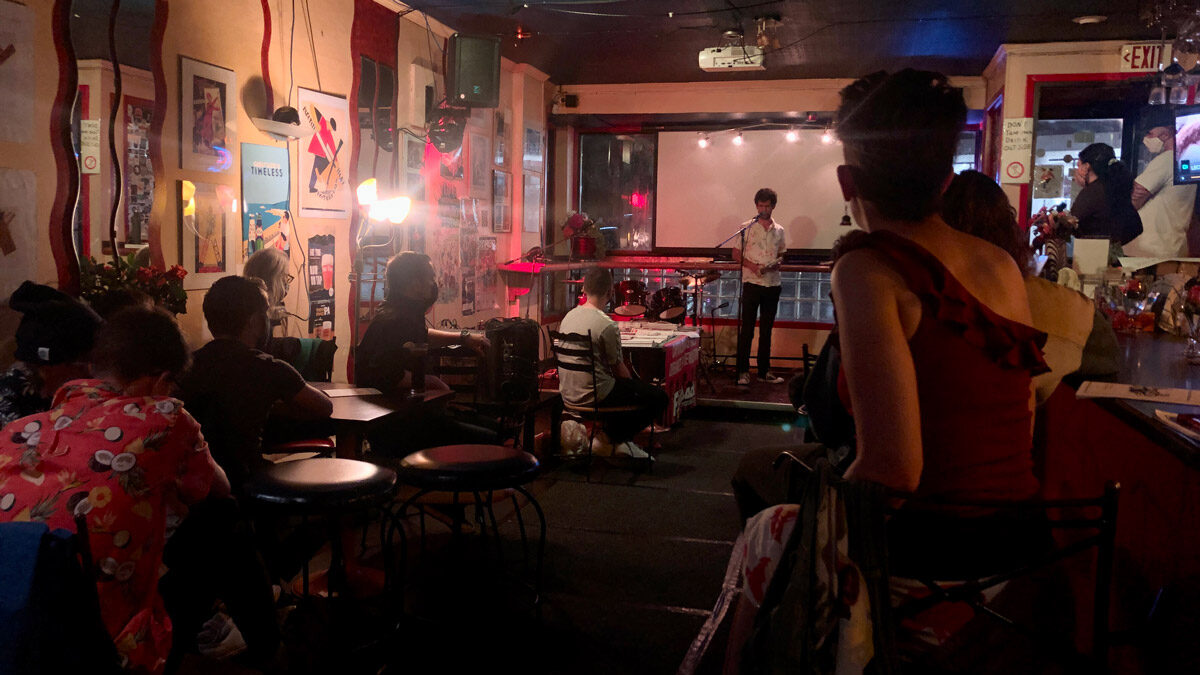 On a rainy evening three nights after the Sept. 20 federal election put a Liberal government back in power, a group of socialists called Fightback gathered at the aptly named Avante-Garde Bar in downtown Ottawa to discuss the failures of capitalism around the world.

Tempers among the young revolutionaries were hot. This included the University of Ottawa’s Fightback students, a chapter of the national organization that also has ties to international socialist groups pushing for global change.

The Avante-Garde Bar, a short stroll from the Rideau Centre along Besserer Street, drew in many guests trying to escape the early evening rain. The bar proudly describes itself as “a revolutionary culture hub where local poets, artists, designers, and activists gather to discuss and implement their latest projects.”

The night was overcast and windy, but that didn’t put a damper on the masked attendees’ social-change brainstorming session.

Self-described young Marxists huddled to chat in the cramped, dimly lit space. Corona beers and colourful cocktails decorated their tables as they awaited the featured speaker to step on stage and kick off the event.

Then the jazz on the stereo stopped and the chatter faded as veteran comrade Marco La Grotta was introduced, visiting from Toronto to give his much-anticipated speech.

And it was a rousing one.

La Grotta began by highlighting the difficulties that had arisen in the previous pandemic year, citing economic and political crises in polarized countries around the globe. He also referenced the loss of jobs, homes and family members along with rising numbers in drug abuse, domestic abuse and suicide. He then went on to discuss how politicians such as Alberta Premier Jason Kenney had promised a better 2021 with happier days ahead.

“It’s 2021 now and I don’t feel very happy. In fact, I feel quite angry. I feel pissed off,” La Grotta said. “Look around the world. Not a single one of the problems brought forward by this system has gotten better. They’ve gotten worse.”

The attendees mainly kept quiet as La Grotta described the many lives lost to COVID-19 while big businesses and capitalists flourished. A few in the crowd interjected with angry remarks, all heads nodding in unison as those assembled held rich politicians and billionaire entrepreneurs responsible for failing to distribute wealth more fairly, the way they could and should be doing.

“The reason for this pandemic is the incompetence, greed, callousness, and baseness of the political elite in this country,” La Grotta said, going on to criticize such people as U.S. billionaires Elon Musk and Jeff Bezos for occupying themselves with their space race over the past year while their companies made record profits.

“These people make me sick. The spaceships they are riding are stained with blood from top to bottom.”

The Canadian election inevitably came up, and La Grotta made it clear none of the parties had young socialists’ interests in mind. He said: “If ‘none of the above’ was an option, then they would’ve formed a majority government.”

La Grotta said he was desensitized to the election, despite it costing $600 million to maintain the same government with party seat totals nearly identical to the results in the 2019 election. He described how the only solution was transforming the entire system from the bottom up, uprooting it and building something new — under the direction and authority of the working class.

By studying the theory and history of the socialist movement, he said, people can arm themselves with political programs they can take into their communities to “build the revolutionary leadership the working class deserves.”

Despite current circumstances appearing bleak to those committed to radical social change, La Grotta said he only sees opportunities for optimism — especially with civil strikes happening in Myanmar, Colombia, and even the U.S., with many people going out to defy those in power. He said these actions are signs of a hopeful future.

“It wasn’t just the numbers that blew us away, but what it represented: a fundamental shift in people’s consciousness,” La Grotta said. “We live in an unprecedented time. It’s a revolutionary era we’re entering.

“When we come together, there’s not a force on Earth that can stop us. We can bring this system to an end,” he said, wrapping up his address. “The mighty and powerful only seem that way to us because we are on our knees. Let us rise.”