4 days ago 0 8 min read
We use cookies to provide a personalized experience for our users. By continuing to browse this site, you give consent for cookies to be used.
Got it!
Home > Arts & Culture > Theatre > An ‘immersive’ theatre experience goes from Paris to London to Lansdowne Park 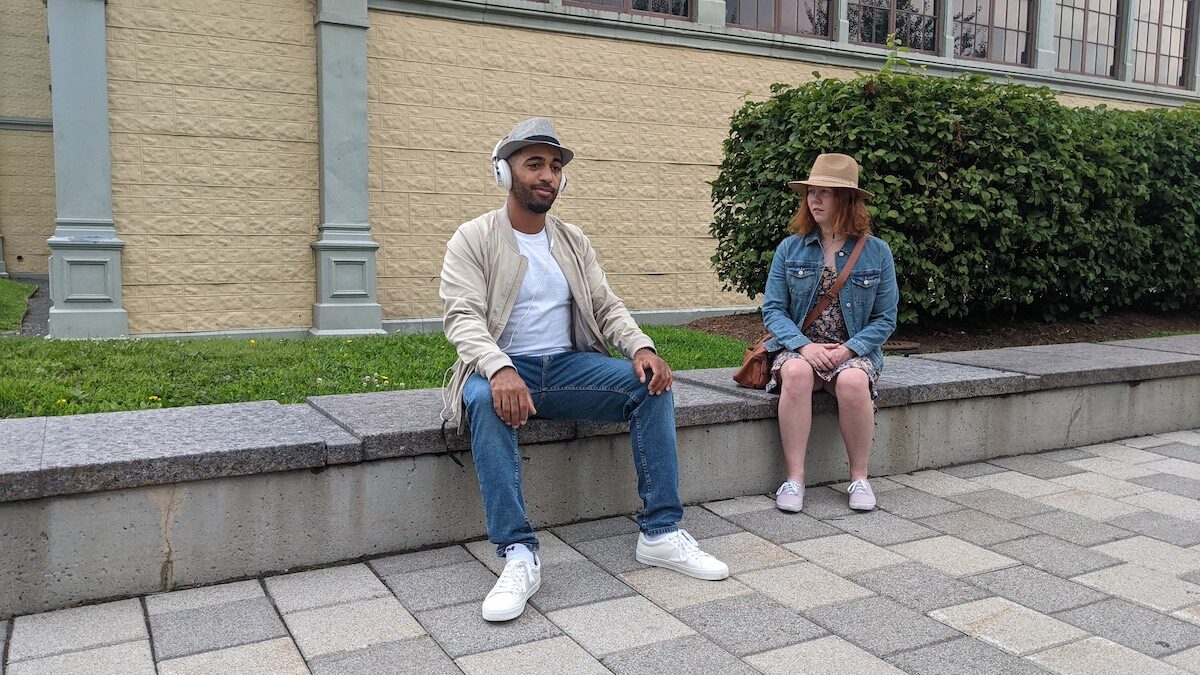 When I went to university for theatre production and design, we had a ‘cheese’ lecture. Really it was less of a lecture and more of an evening soirée where theatre professors did what they do best — monologue.

The gist of the lesson is this: in life — and theatre and cheese — you start mild and work your way up to things that are sharper and more complex.

The same could be said for the new “COVID-safe” theatre experience at Lansdowne Park.

“C-O-N-T-A-C-T The Show” is  a 45-minute outdoor performance that’s received global acclaim during the COVID-19 pandemic. In Ottawa, actors guide an audience around the park on an immersive adventure into the minds of the characters they present.

Though the actors never speak, the show is available in five languages.

The characters’ conversations and thoughts, as well as the show’s excellent sound design, is delivered through a custom phone app. The app requires data to stream the audio and is available for Apple or Android devices.

Like the proverbial cheese lecture, the show begins subtly.

After being instructed on use of the app, and given clear instructions on which actor to follow for the duration of the show, the audience is left to their own devices.

Sarah, around whom the show centres, makes her entrance slowly. Perhaps it will be more noticeable on days when the park is less busy, but on a sunny, bustling day it’s hard to distinguish her from the crowd.

Rather than being overwhelmed by the setting, Sarah, played by Lucy Sanci, uses it to her advantage. The show markets itself as immersive, and it delivers. Sanci’s entrance is like bumping into a stranger and being welcomed into their world for a minute, or perhaps like having a stranger bump into you.

The show begins with Sarah lost in her own thoughts and wandering. She sits on a bench and is joined by a stranger she hopes will not speak to her.

Quickly, she realizes that not only is the stranger speaking to her, he can hear her thoughts. The situation seems like an even greater intrusion when the audience realizes Sarah is in the midst of processing her father’s death and the loneliness she’s been facing during the pandemic.

But the guardian angel who has joined her takes the edge off the overstep by being thoughtful and magnetic.

The guardian angel, Rafael, played by Chris James, tips the show’s feeling from subtle to intense. His presence sends Sarah reeling, and then pulls her back together again.

One of the more difficult aspects of watching the performance is how it draws the attention of even non-audience members as the emotion between the two builds.

In a way, the presence of so many real people living their lives in the park serves as a realistic backdrop to a piece about grief and emotion. Aren’t we all just going through life within our own interior world, ignorant of each other’s struggles or bliss?

On the other hand, you may miss the climax of the show as a young child whisper-yells to his even younger sister to not bike through a pivotal scene.

But isn’t that also entertainment?

C-O-N-T-A-C-T’s greatest success, and failure, is in its accessibility.

Audience members can attend the same performance but have it streamed in the language of their choice. Not just English or French, which might seem typical for residents of Ottawa, but Greek, Italian or Dutch, too.

However, the 45-minute show also takes place on foot. Produced in part by the Glebe BIA, it seems odd that a show performed in a neighbourhood known for its older population would not have more accessible options available for those who may not be able to stand for that long.

Andrew Peck, executive director of the Glebe BIA, says the location was chosen for its flat and even terrain, but that feedback about the show requiring even more consideration for accessibility is “worth hearing.”

Though the audience is welcome to sit when the show stops for scenes at locations around the park, that information was not forthcoming. If you choose to go, be aware that you can seat yourself at any nearby bench, ledge or otherwise convenient surface.

Perhaps the most enticing part of the show is that you can go to it in person. Though capacity limits on theatre and performing arts spaces were raised last week, there is still a shortage of live events in Ottawa for the remainder of the summer.

Not only is C-O-N-T-A-C-T up and running, it’s particularly safe. Performances are outdoors and capped at 20 audience members. Everyone is required to wear a mask and practice social distancing.

Head down to Lansdowne to enjoy a show that’s like a plate of cheese. Sometimes soft and sometimes sharp with many things you enjoy and some you don’t. I personally would never eat a cheese with mold in it, but good for you if you enjoy that sort of thing.

I do, however, enjoy watching theatre after more than a year with no in-person performances, and hopefully you will too.

C-O-N-T-A-C-T The Show began Thursday and runs six days a week, multiple times a day for the next seven weeks. Tickets are $49. Audience members require their own smartphone, headphones and mask. Download the app in advance to save on data.