4 days ago 0 1 min read
We use cookies to provide a personalized experience for our users. By continuing to browse this site, you give consent for cookies to be used.
Got it!
Home > News > Canada > Ontario > Back To School? Alberta government releases three scenarios for sending students to class in September 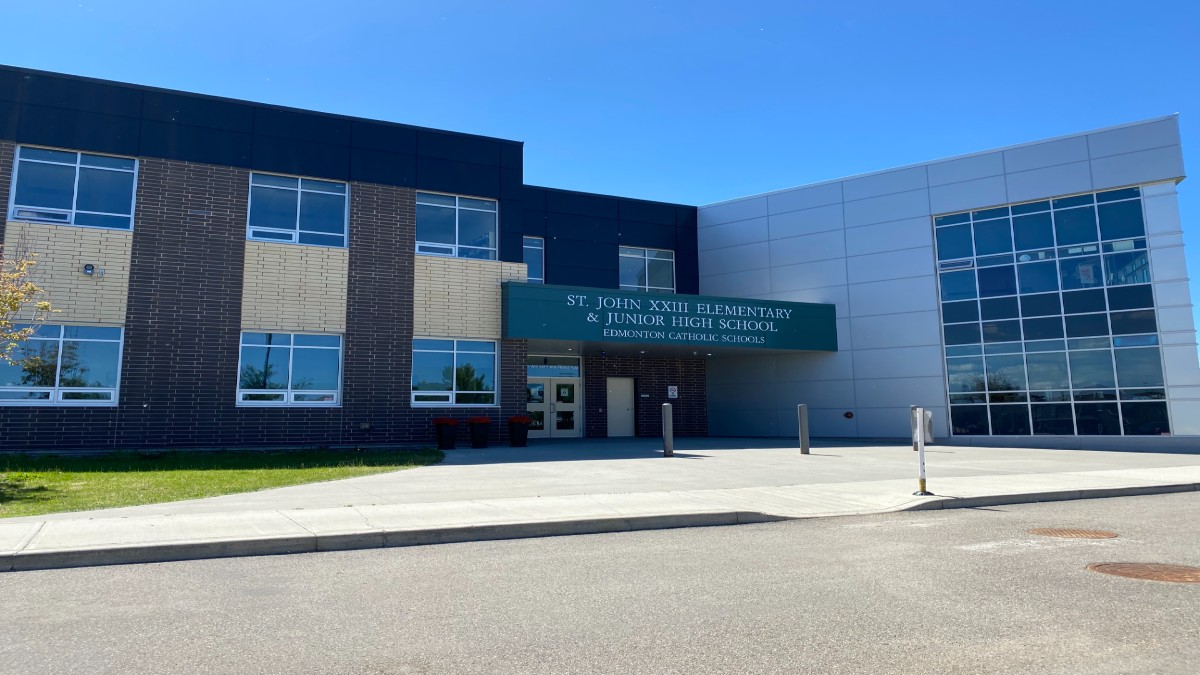 The Alberta government won't announce a final decision until Aug. 1 about which of three possible back-to-school scenarios will be implemented for the fall term. In two of three scenarios, announced on June 10, schools such as St. John XXIII Elementary and Junior High in Edmonton will see students return to the building for in-person classes. [Photo © Raylene Lung]
Alberta

Back To School? Alberta government releases three scenarios for sending students to class in September

EDMONTON — The Alberta government has released three possible scenarios for returning to school in the fall. Two of the plans involve a physical return to classrooms; the third assumes continued online learning without physical gatherings in elementary and secondary schools across the province.

Each plan covers operational issues, health requirements and student learning, as well as mental health and psychological support in anticipation of schools reopening across Alberta under various COVID-19 protocols.

“Educators, administrators, families, health professionals all need to work together to support a safe return to in-person classes,” she said.

“We are hoping, and it is likely, students can return to daily classes at school while taking health precautions, but we have to prepare for all possibilities,” Alberta Education Minister Adriana LaGrange said as she announced the options recently.

Dr. Deena Hinshaw, the province’s chief medical officer of health, said in a press release that Alberta’s health and education officials must consider the risk of COVID-19 outbreaks in closed settings such as elementary and high schools.

“Educators, administrators, families, health professionals all need to work together to support a safe return to in-person classes,” she said.

Alberta Education worked with many partners to develop the three plans, including the Alberta School Boards Association and the Alberta Teachers’ Association, and received input from more than 66,000 parents.

Each plan allows for parents, students and teachers to prepare for a learning environment that puts everyone’s health and safety first, officials said. Still, the COVID-19 situation remains unpredictable.

Edmonton resident Evelyn Blanchette says that despite health concerns that could arise from parents sending their children back to school, her own daughter deals with anxiety and needs to go to school for motivation and socialization.

“School provides so much more than school, and that’s what we’re really missing with online learning,” she said. “They don’t have any social interaction. We’ve had one class out of five that has had Zoom meetings.”

Jason Schilling, president of the Alberta Teachers’ Association, said a recent survey suggests that school staff are concerned about their health and students’ health upon returning to work.

“We expect to work with government to strengthen and improve the plans for re-entry to ensure that schools can provide healthy and safe environments for teachers and students,” Schilling said in a press release after the provincial government’s announcement.

However, a Grade 1 and 2 teacher from Edmonton — who asked not to be identified out of concern for her job — said she finds the plans to be unrealistic and vague. She said she worries that support resources are being stretched too thin, with the added pressure of social distancing and intensified sanitation.

“With less funds available, more equipment needed and additional staffing required to fulfill safety precautions, it feels an awful lot like sending children back to school will be a large-scale social experiment,” she said.

Return-to-school learning may vary across the province, and the government is encouraging school boards to develop their own, specific COVID-19 guidelines.

The Ontario government has taken a similar approach with three envisioned scenarios, the first being regular school days, the second having smaller class sizes, and the third being a possible mixture of at-home and in-school classes.

On the west coast, B.C. already had kindergarten to Grade 12 students return to in-class learning under new health guidelines introduced on June 1.

All those up to Grade 5 have had the option of attending school part-time, while all higher grades have been able to attend school “the equivalent of one day a week.” Children of essential workers and those who need additional support were encouraged to attend school full-time.

It appears that these options will continue into the fall in British Columbia.

The Alberta government said it will reveal its final decision about the fall scenario on Aug. 1. School authorities have been told they should prepare for the province’s decision to be made just before the Aug. 1 deadline.

“There are a lot of hurdles that will need to be cleared, and we will require decisive and supportive leadership from the government in order to be successful,” said the Edmonton teacher. “And if the last few months give any insight, it’s going to be a long-haul for students, parents and teachers.”

In the News: Thursday, June 25