1 week ago 0 1 min read
We use cookies to provide a personalized experience for our users. By continuing to browse this site, you give consent for cookies to be used.
Got it!
Home > News > Ottawa > Centretown neighbours buy less, share more for planet and community 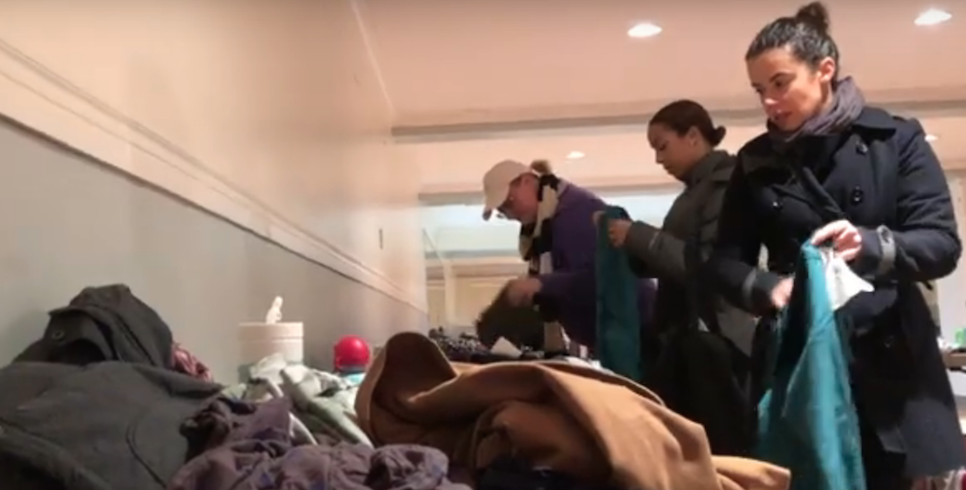 Centretown residents came together on Nov. 29 during a "Junk in the Trunk" event in which neighbours shared unwanted items for free at the Royal Canadian Legion on Kent Street. [Photo @ Shaked Karabelnicoff]
Community

This past holiday season, two Centretown residents worked to reduce waste and consumerism by gathering members of their community to exchange items they no longer use.

Joan Daignealt and Angel Vezina are part of the Centretown “Buy Nothing” Facebook group, a forum for members to exchange free items in hopes of building community while buying less and sharing more.

“What better way to help unite the community than everyone just getting together and giving their stuff away for free,” said Daigneault, organizer of a Buy Nothing Centretown item-exchange event on Nov. 29.

As a member of Buy Nothing Centretown, Daigneault is part of a community of almost 600 who exchange items for free on a daily basis. She decided to organize a meet-up when she noticed members of the Facebook group had been exchanging items online for months but many had never met in person.

This is due to the popular “porch pick-up” system, she noted, in which members leave their items in a mailbox or on their porch to be picked up by a neighbour, so there is no direct interaction required.

“It’s nice to put faces to names,” said Vezina, an administrator of the Facebook group who helped Daigneault plan the event. “I know people from seeing them post online, but it will be nice to walk down the street and hopefully run into some people I recognize.”

Vezina and Daigneault hope to build community beyond the digital world, they explained.

“We are a community downtown. It’s big, so people don’t always say hello to each other on the street,” said Vezina.

Often, members of the group make requests for items or share personal stories about financial struggles, but it can be hard to empathize when you have never met, added Daigneault.

“Getting together (off Facebook) puts a completely different perspective to the group,” said Daigneault. “Now when you see someone sharing on the group, you can think about them from meeting them in person and really want to reach out and help them.”

They say the turnout for the event was even better than they expected.

“We were expecting people to be filling half tables with their stuff, but it has been full tables, lots of people — more than we expected. The turnout has been fantastic so far,” said Daigneault.

Jennifer Collins, a member of the group who participated in the event, said she was drawn to Buy Nothing because she can help her neighbours and the environment at the same time.

“I love that it helps avoid putting things in landfills,” she said. “It’s environmentally friendly, all of this is being reused. Items are not being just tossed out, other people are able to benefit from someone who just doesn’t want it anymore.”

She explained that it is satisfying when others repurpose items that otherwise would have gone to waste.

“Someone came by and said it’s really hard for them to find clothes in their size, but my clothes are exactly it,” she said, smiling. “I was just getting rid of stuff and she is so thrilled, it totally made her day!”

There are more than 50 Buy Nothing groups in Ottawa. Each is focused on a specific neighbourhood in order to maximize social interactions.

“I’m talking with people that I might not normally talk with just because they’re not in my age group or not doing the same kind of stuff as me,” added Collins. “But if I ever see them on the street, I’m going to go up and hug them.”

The legion donated the space for indoor yard-sale style event.

“We were happy to donate the space for a community-building activity,” said Tom Oakley, entertainment director of the Montgomery Legion. “That’s what the legion is here for.”

To join a Buy Nothing Group on Facebook, visit https://buynothingproject.org/find-a-group/ .