1 week ago 0 1 min read
We use cookies to provide a personalized experience for our users. By continuing to browse this site, you give consent for cookies to be used.
Got it!
Home > News > Ottawa > City of Ottawa’s new recycling regime will shift responsibility to producers to re-use, divert waste 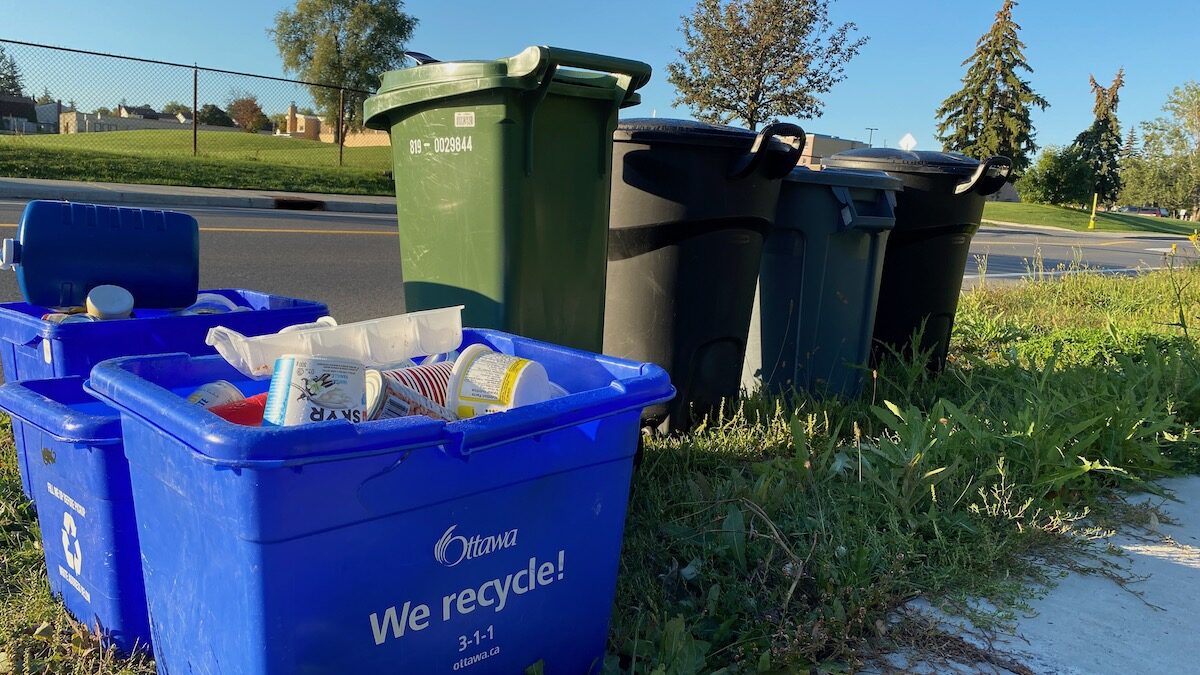 Material eligible for curbside recycling in Ottawa include paper and cardboard products, metal, plastic and compostable items. The city is supporting a provincial transition to IPR — Individual Producer Responsibility— to shift the responsibility for Blue Box recycling to the producers of products that produce recyclable waste. [Photo © Jasmine Bhimani]
Environment

Businesses responsible for producing blue box items such as paper, glass and metal in Ottawa will soon become responsible for collecting these materials and properly recycling them.

“This is the first time in Ontario someone (other than a municipality) is completely responsible for a Blue Box Program,” said Andrea Gay Farley, the program manager at the City of Ottawa’s solid waste services.

The transition will take place between July 2023 and the end of 2025, giving the city time to work with producers to identify solutions for waste collection and diversion. The details about exactly how the program operate will be confirmed over the next two years.

Once the new system is in place, large cities in Ontario such as Ottawa, Toronto and London will put the financial and social responsibility on producers to collect blue box materials and meet diversion targets to avoid sending these items to the landfill.

The initiative is part of two larger pieces of legislation put in place by the Ontario government — Resource Recovery and Circular Economy Act and the Waste Diversion Transition Act — to create a “circular” waste economy that sees producers responsible for the waste generated by their products and the reuse or disposal of leftover material.

Gay Farley said producers will be responsible for providing a level of service residents are used to. Residents “shouldn’t notice a difference,” she said. “The transition should be fairly seamless.”

The Resource Productivity and Recovery Authority (RPRA) will be the new oversight body for regulating independent producers in this initiative, according to its website. The RPRA is mandated by the Ontario government to manage not only this initiative but other similar programs.

Lee said, however, there may be different programs for materials outside of the blue box criteria, such as batteries. There may be options for consumers returning these used products to producers or collection at major city or social events, according to Lee.

Ottawa has already begun to implement more targeted individual producer responsibility (IPR) programs. In January 2019, used tires were brought under an IPR; used batteries and electronic equipment are also collected under an IPR system. The changes meant that the companies producing those products became responsible for collecting waste material for reuse or disposal.

“The transition of these programs represent minimal impacts to the city’s current waste management programs in comparison to the greater magnitude of change expected to occur from the transition of the Provincial Blue Box Program,” stated a memo to city councillors regarding the program.

City councillors were updated on the changes to the city’s recycling regime during an environment committee meeting on Sept. 17. Among the documents presented was a December 2020 letter to the province in which the city said it supports “making producers of packaging and products fully responsible for managing their products and packaging to end of life.”

“Municipalities cannot control the type of products or packaging being supplied into the market, we have little influence on recycling markets, nor can we predict changes in packaging to make appropriate investments in collection and processing infrastructure,” the letter added. “This is something that producers have a stronger ability to do and they have the greatest ability to drive positive environmental outcomes in the most efficient and effective way.”

The Trail Road Landfill in southwest Ottawa, Ontario’s second largest garbage dump, will reach capacity by 2045. Without the IPR program and other similar waste management programs, Ottawa’s ability to manage waste will diminish in the next few decades.

Ontario is not the first province to implement an IPR program to improve waste diversion from landfills. For example, in B.C., consumers can return batteries and coffee pods to manufacturers for recycling.

Independent IPR initiatives also exist. Nespresso is one company that provides recycling bags with its coffee pods, allowing consumers to collect and ship the used pods back to the company, which then processes the aluminum pods and recycles them.

Direct recycling such as the programs above have been successful, but further recycling methods may be implemented during the transition period to IPR, according to Gay Farley.

Waste diversion programs such as the ones the city is implementing could also help combat climate change and help Ottawa achieve its emission-reduction targets by diverting more material from landfills.

Methane leaking from landfills account for 20 per cent of all emissions in Canada.

When the transition period ends by the start of 2026, and the city expects to completely shift to IPR for blue box items.

The city said it will continue to work closely with the Resource Productivity and Recovery Authority during and after the transition period. The RPRA will be responsible for ensuring service to citizens will not be disrupted and will monitor waste-diversion targets under IPR recycling.

"The Resource Productivity and Recovery Authority is the only authority on the regulation," added a City of Ottawa spokesperson. "The City will make every effort to work with the producers to try to make disruption is minimal as possible, but ultimately it is the producer’s responsibility to collect the Blue Box material under the regulation."

Editor's note: This story has been updated to correct the transition and implementation timeline for changes.