4 days ago 0 3 min read
We use cookies to provide a personalized experience for our users. By continuing to browse this site, you give consent for cookies to be used.
Got it!
Home > Featured > Iranian DJ ditches Ottawa for fresh tracks in Tehran 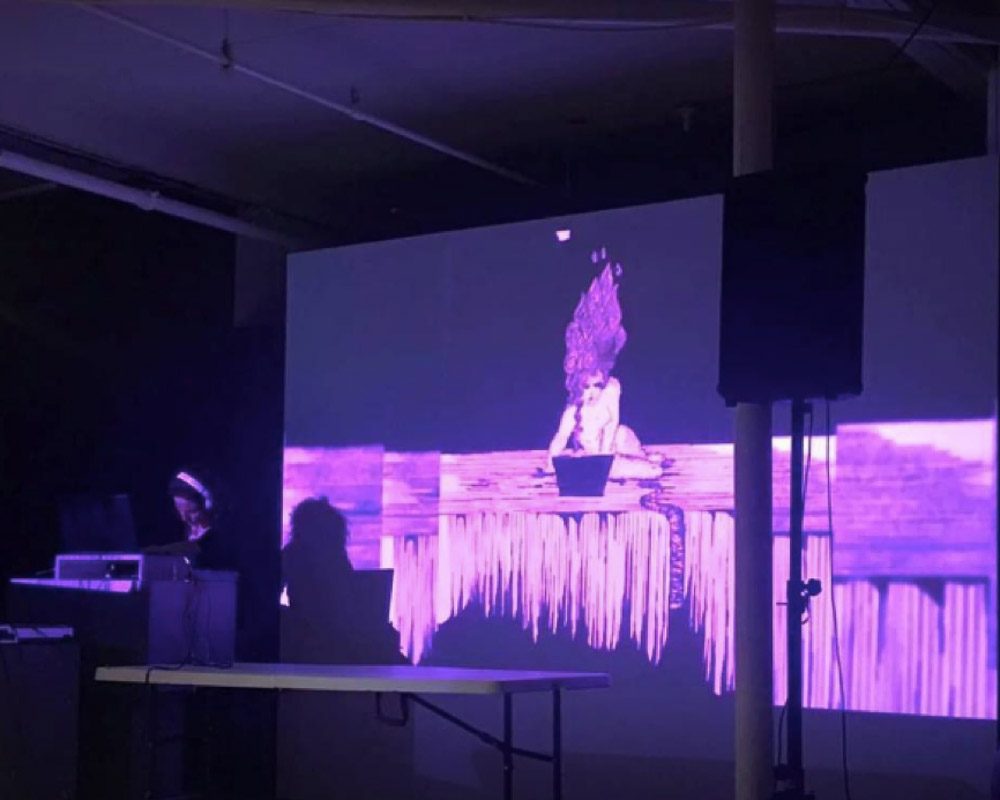 By Dana Heatherly and Ash Abraham, 3 years ago 0 7 min read

By the time you read this, Iranian DJ-meets-artist Golbon Moltaji will be gone from Ottawa. Her canvases carefully packed up, and her mixing console stowed away.

Golbon Moltaji, we hardly knew you. But before she split Capital Current wanted to get to know her better.

So on a cold afternoon, she welcomed me to her cozy Centretown apartment. Her living room was overflowing with paintings, sketches and easels. And she had cultivated a jungle of houseplants which she said are the offspring of one large fern.

Occasionally, her space was transformed into a stage where dozens of people enjoyed food and listened to DJ Golbon.

But today it was just her home.

She put a mustard-coloured custard in a glass bowl into my hands. “You have to try this. It tastes just like Iran,” she told me. It’s flavoured with saffron and cardamom with a floral aftertaste. I finished the whole bowl.

Moltaji has dark, unblinking eyes that take in everything. Besides creating electronic music, she is a keen visual artist. She pointed to the pile of canvases in a corner. “Those are just practice,” she said with a shrug.

Her art incorporates detailed cityscapes, forests and dark backgrounds. One painting depicted a forlorn whale in the streets of downtown Toronto.

I asked her where she got her ideas for the surrealist pieces.

“I have visions,” she saif. Then, she laughed and said sarcastically, “I have become the three-eyed raven,” undercutting her serious demeanour with self-deprecating humour.

“If it’s a vision in my head, it has to come out on canvas,” she said. She held up a stunning painting of a forest and an ethereal looking horse. “Like this one. This is shit.”

Moltaji grew up in Tehran, Iran.

“I’ve been disturbing the conventional since 1985,” she said.

At two, she started drawing. Moltaji has a pang of regret for not taking art more seriously as a young person. “The talents you are given, that’s what is going to help you later in life.”

“What were the first few years in Canada like?” I asked.

“Eventually, all those things you gained get stripped off,” she said.

To support herself, Moltaji took on a series of odd jobs such as selling ice cream in the suburbs, working at a gym and at the mall. She felt like she was going nowhere.

After completing her Masters in Windsor, she moved to Ottawa to pursue a PhD. In that time, she started drawing more. She said her art deals with themes of “the adamant coldness of social interactions.”

In an artist statement Moltaji described a forlorn whale, which is part of a series called 52 Hz (Toronto Series):

“A whale that belongs to the world of sound (ocean) comes to the world of sight (land) to showcase the universality of hurt and absence of love […] The whale is enormous yet, invisible, stained and frightening in an undesirable way; even though her blood stains are everywhere, no one cares to rid themselves of her.”

When an opportunity to learn how to produce electronic music came up, Moltaji jumped in feet first. DJing was an activity that was not only new and challenging for her; it was something she had hoped would draw her into Ottawa’s arts community.

Moltaji is attracted to electronic music, citing Oxygene by French electro producer Jean-Michel Jarre and other European artists as influences.

“I like to become a vessel for telling a story that isn’t necessarily mine,” she says.

“The whale is enormous yet, invisible, stained and frightening in an undesirable way; even though her blood stains are everywhere, no one cares to rid themselves of her.”

Mixing music is about understanding which tracks and beats complement each other. Blending tracks, beats and mediums to tell a story came naturally to Moltaji.

“There is an experience that you want to create and an environment you want to influence by a certain type of sound,” she explains.

Seeing the crowd’s immediate feedback appealed to her. She says DJing made her feel like a god.

And “artists generally want to be gods,” she says.

Before long, Moltaji was performing in clubs all over Ottawa, where she combined her visual art and hauntingly dark techno into stunning performances.

Academic and Ottawa musician Richard Pinet has been friends with Moltaji for several years. The first time he met Moltaji he was taken aback by her incredible presence, he says. Pinet describes her as reflective and intense, but full of light when you make her laugh.

He finds her work evocative and recalls seeing her art at an exhibit in Ottawa. “Her attention to detail is really quite remarkable.”

Pinet thinks Moltaji’s lack of resonance may have to do with her diverse range of talent. Her work is difficult to categorize – part music and part art – but the scene in Ottawa seems to exist in silos.

“I’ve been disturbing the conventional since 1985.”

For the past few years Moltaji has hopped from gig to gig trying to make a way for herself in the local art scene. She feels like she has never punctured the city’s often insular art scene.

Over the past few years, audiences have been fickle, and the next gig was never guaranteed.

“I don’t have the motivation any more.”

Playing up her ethnicity may have helped her – but that’s not appealing to her. She gets exhausted explaining Iran, for example, when people ask her if it’s difficult to be a woman in Iran.

She says people go out to shows in droves in Iran. Nightclubs are prohibited, and people don’t drink in public locations, but despite the restrictions, audiences show up for the music and the performers.

“In Tehran, I’ve seen European artists come and perform and they’re always like, ‘What am I supposed to do with no drinks and no dancing?’ But then when they finish their performance, they’re taken by the experience of having an attentive crowd.”

She said she believes this kind of eagerness is lacking in Ottawa. The rare occurrences of techno are typically associated with drunken adults raving like teenagers or the Escapade festival.

So, “I am going back to Tehran. The thing is, everyone here is content with what they have, and I am not.”

Her friend Pinet believes Ottawa may not be hungry enough for an artist like Moltaji.

“Maybe Ottawa doesn’t deserve her,” Pinet sighs. “Her determination to keep creating in spite of not much recognition…that is a sign of a real artist.”

I ask Moltaji if there is anything more she would like to add about herself.

I switched on the radio to hear Moltaji’s show called Twisted Transistor on CHUO 89.1 FM. Some times she highlighted international music and other times she played her own mixes. She contributed until she left.

Listening to her voice made me regret seeing an artist like Golbon Moltaji leave Ottawa because there was no artistic home for her here. I turned off the radio and stepped outside to a grey winter sky surrounded by drab downtown office buildings.