4 days ago 0 6 min read
We use cookies to provide a personalized experience for our users. By continuing to browse this site, you give consent for cookies to be used.
Got it!
Home > Health > Seniors > ‘Know that you are special’: Cards, letters deliver powerful message to Ottawa seniors in pandemic isolation 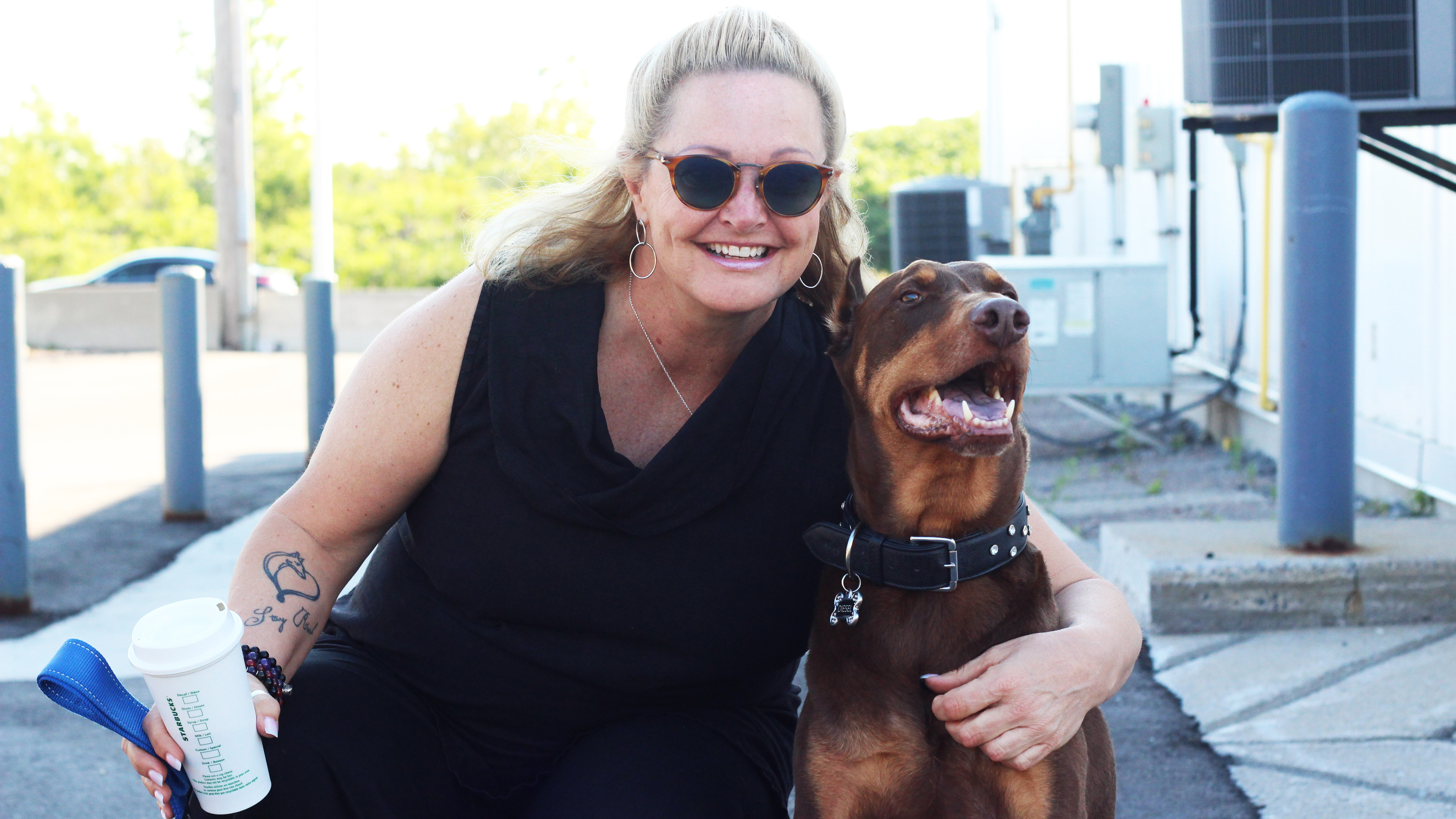 Debbie Abfalter smiles with her Dobermann, Diesel, a therapy dog for seniors with Alzheimer's and dementia. Abfalter founded Seniors in Isolation, a Facebook group through which volunteers write cards and letters for delivery to seniors living in long-term care homes and who have been prevented from visiting with family during the COVID-19 pandemic. [Photo © Eden Suh]
Life

‘Know that you are special’: Cards, letters deliver powerful message to Ottawa seniors in pandemic isolation

By Eden Suh and Kate Schellenberg, 2 years ago 1 4 min read

As the temperatures neared the mid-30s on Father’s Day, Debbie Abfalter took a detour on her way to the beach to stop at the Stirling Park Retirement Community.

Despite the blistering heat, residents gathered outside of their building — located near the Merivale Mall in west-end Ottawa — to greet her. That’s because when Debbie stops by she always brings gifts.

This time she brought 48 handwritten letters from an Ottawa woman named Kelly Stanley. Stanley, a dog lover, included pictures in each letter of Bear, her St. Bernard mix.

Joann Plomer was one of the residents waiting to receive a card. She chose one decorated with butterflies and had a staff member, Nissa Coghlan-Kerr, read it aloud:

“Hi there. Bear and I wanted to send you a little note to say hello. Bear is a rescue dog and we’ve been together almost three years now. He is my big fur baby. He may look intimidating, but he is full of love and drool.  We are sending you best wishes and sunshine. Kelly and Bear.”

Plomer, a self-described animal lover, was touched by the pictures of the dog. “Gives me goosebumps. I love him. I’d love to have him for a while. Can I dog-sit him?”

Stanley is a volunteer with Seniors in Isolation, a Facebook group started by Abfalter. In her work with seniors, Abfalter noticed a huge gap in the Ottawa long-term care community during the COVID-19 pandemic.

“Seniors were being locked in their rooms, being forced to self-isolate in long-term care homes,” she recalled. “So they were not allowed to see their families, their caregivers. They were literally in isolation.”

Determined to help fill the gap, Abfalter started the Seniors in Isolation Facebook group, asking members to write cards and letters to be sent to seniors across Ottawa.

Since the group’s creation, Abfalter has received more than 1,000 cards, letters and gifts — even some painted rocks. The letters pour in from all over Ontario and some even from as far as Nova Scotia.

“I got a letter from an eight-year-old boy — very nice letter — and we’ve been writing back and forth ever since.”

Residents of the community, whose direct human contact has been limited to staff and others living in their building, look forward to the regular deliveries of letters and more.

“I think it’s a great idea,” said Ford. “We don’t have that much contact with the outside world, even if you have family. This is the first time I’ve been outside the front door in three months.”

“It means a lot, it certainly does,” said Plomer. “It’s a pleasure just to sit out here and do this with you girls. You couldn’t ask for a better place than this to be in.”

Part of Plomer’s fondness for Stirling Park has to do with the fact that there have been no COVID-19 cases reported in the home since the pandemic began. That means certain activities have been able to continue with social distancing rules in place.

We are overcoming such difficult times and then having (the residents) read this card from a stranger that doesn’t know them, and it saying, ‘I’m giving you the biggest hug, and know that you are special, and know that I love you.’ It’s so sweet.”

Coghlan-Kerr, the activities coordinator at Stirling Park, said she’s enjoyed seeing the impact the cards have had on the residents.

“We are overcoming such difficult times,” said Coghlan-Kerr, “and then having (the residents) read this card from a stranger that doesn’t know them, and it saying, ‘I’m giving you the biggest hug, and know that you are special, and know that I love you.’ It’s so sweet.”

Fortunately for the residents of most long-term care homes, the City of Ottawa has recently allowed immediate family members to visit if they have had a negative COVID test in the past two weeks.

Ford’s daughter isn’t wasting any time: “She is getting the test today,” he said. “She is very nervous!”

Despite the easing of visitation restrictions, Abfalter said she plans to continue the Seniors in Isolation group.

In the News: Wednesday, June 24