2 days ago 0 4 min read
We use cookies to provide a personalized experience for our users. By continuing to browse this site, you give consent for cookies to be used.
Got it!
Home > News > Ottawa > Ottawa restaurants divided on continuing vaccine passport requirement 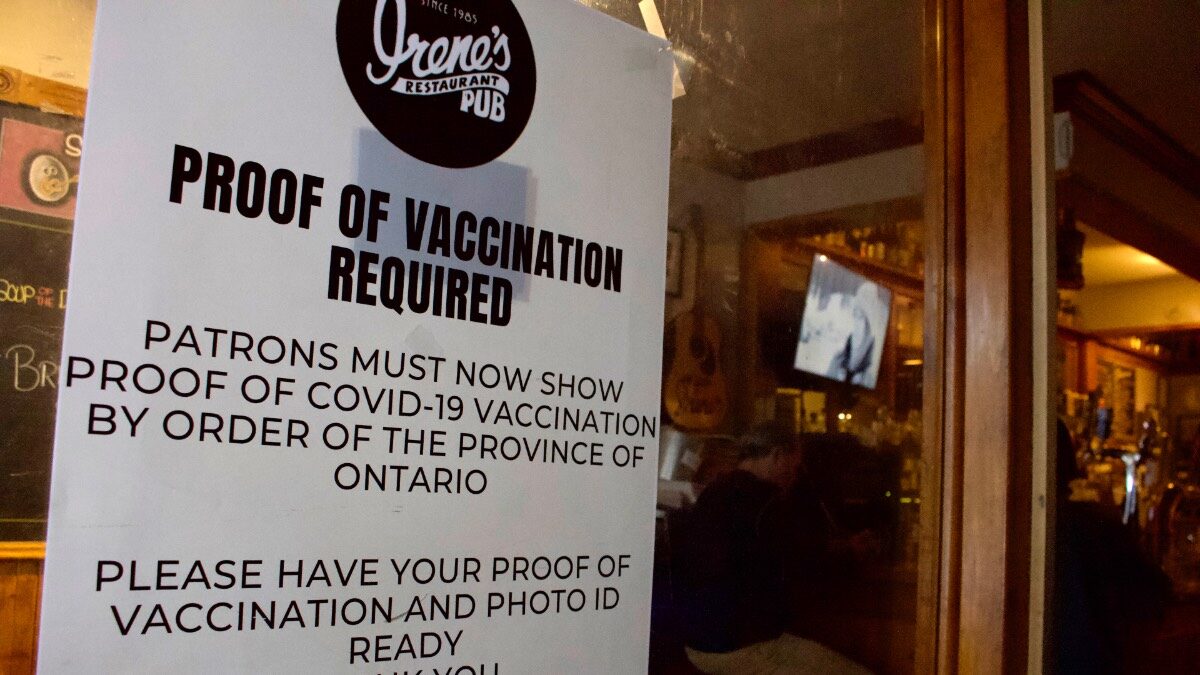 By Cate Newman and Erin Hood, 5 months ago 0 5 min read

With “vaccine passports” and some other COVID-19 restrictions now no longer required in Ontario, many restaurant owners say they are relieved they can stop checking vaccination documents, a task they say they weren’t well prepared to perform in the first place. But some others are keeping the requirement, saying it’s still an important safety measure.

Ivan Gedz, an Ottawa restaurateur and co-owner of Union Local 613 in Centretown, said that, while his business has chosen to lift vaccine passports, the measures were worth it because they provided customers with a sense of security.

Gedz says he consulted his staff when deciding whether to continue checking passports.

“All of our staff are three-dose vaccinated. We mandated that. So we feel comfortable with their level of protection. We pitched this decision to them and asked for their input as well,” said Gedz.

One of the reasons Gedz chose to stop checking vaccine passports was because they only mandated two doses, not three.

“Everything that we had read, or seen reported … suggested that it’s at best performative unless it’s a three-dose vaccine mandate,” he said.

There’s a very good chance the restaurant would have maintained vaccine passports if they required three doses, said Gedz.

“Because it’s only a two-dose, it doesn’t seem to be all that effective.”

Workers in the service industry have been on the front lines of enforcing vaccine and mask mandates, occasionally to the displeasure of potential customers. A survey by the umbrella group Restaurants Canada found that half of the restaurants who responded reported hostile interactions with people opposed to the requirement.

“If there was substantive evidence that it was the best thing for society from a public health standpoint to keep the passport, then I think you’d weigh that risk to engage in a potential altercation,” Gedz said.

The fact that COVID-19 restrictions are a controversial topic is fresh in the minds of Ottawans after the recent occupation in the downtown core by convoy demonstrators. Gedz has joined the class-action suit against convoy members.

He feels that restaurants choosing to keep the vaccine passport may be doing so as more of a political statement than a cautionary measure.

“I sympathize with and probably agree with them in terms of the sentiment,” said Gedz.

“However … had you wanted this, you should have been advocating ardently for a three-dose vaccine passport.”

Dr. Christopher Labos, a Montreal-based epidemiologist and cardiologist, has called for this as well.

As for the customers, they have mixed opinions regarding individual businesses’ decisions to uphold or remove the use of these passports. In a straw poll conducted on Instagram the day vaccine restrictions were lifted, 45 per cent of respondents said they do not support the removal while 55 per cent said they did.

Dr. Vera Etches, medical officer of health with Ottawa Public Health (OPH), said in a Board of Health meeting on Feb. 28 that the agency was “not planning locally to recommend further public health measures as provincial restrictions are lifted.” But Etches added that she still encourages citizens to be cautious.

The owners of Cantina Gia, a restaurant in Ottawa’s Glebe neighbourhood, have posted their decision to continue checking vaccine passports on their Instagram account.“Here we are again in another difficult decision making position,” the post read.

“We ask for all of your continued patience, respect, and understanding with us, all of our peers, and fellow local businesses and their decisions. We are all doing what we feel is right for our teams and communities,” it said.

As dinner service began at Cantina Gia recently, a family of four walked in and after being asked to provide their passports, questioned why it was required despite the changes to restrictions.

The hostess explained: “As of March 1, the government left it up to the businesses to decide for themselves. We’re just keeping it for a while longer.” As the family filed out of the restaurant, two more groups entered and were seated after showing their passports at the door.

There was some evidence that Ottawa businesses were struggling to enforce COVID-19 mandates before the change in restrictions. Ontario Tourism, Culture and Sport minister Lisa McLeod declared in October, shortly after the introduction of vaccine passports, that Ottawa Public Health had told her nearly a third of Ottawa businesses inspected were failing to properly enforce the restrictions.

That led too fines for some businesses. For example, Buster’s Bar and Grill in Kanata received two fines of $1,200 each in one day in October for contact tracing violations and improper mask wearing by an employee.

Steve Schwan, owner and chef at the sports bar, said the end of vaccine passports has been welcome news and his establishment will not continue to ask for them.

“We were never trained to do this,” said Schwan. He called the fines “unfair,” saying that there should have been more communication around what was expected of him and his staff.

Schwan said he also struggled to understand some of the restrictions that particularly affected the restaurant industry. For example, dancing isn’t allowed in a restaurant full of vaccinated and masked customers but unmasked close contact was permitted at sporting events.

Aside from the fines, there were added expenses that Schwan said made things especially difficult, like staffing an extra person to check passports on busy days.

“What most people don’t realize is that the vaccine mandates added extra cost to my business and extra work for my servers and managers,” he said, echoing findings from the Restaurants Canada survey.

The Glebe’s popular Irene’s Pub and Restaurant is another business no longer requiring proof of vaccination.

“It’s hard to implement when the province doesn’t have your back,” said the new owner of Irene’s, Mike Estabrooks.

Whether they have chosen to keep vaccine passports, Ottawa’s restaurants are enjoying a return to normal service with full capacity and no limits to party size. Next week, businesses will face another decision with the end of the mask mandate March 21.

IN THE NEWS: Wednesday, March 16

IN THE NEWS: Tuesday, March 15