3 days ago 3 min read
We use cookies to provide a personalized experience for our users. By continuing to browse this site, you give consent for cookies to be used.
Got it!
Home > News > Ontario > Pumped up: Ottawa drivers offer mixed reactions to Day One of federal carbon tax 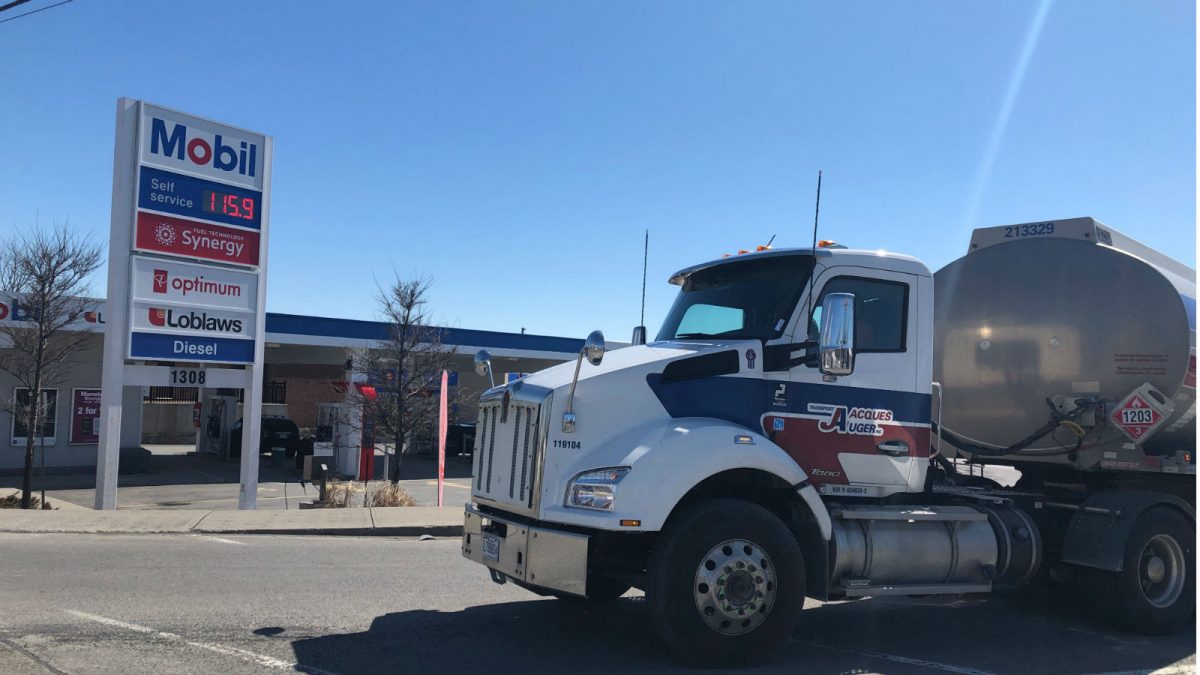 A tanker pulls out of the Mobil gas station at Baseline and Merivale roads Monday morning. Today's price of gas was 115.9 cents per litre in Nepean. The rate includes the new 4.4-cent carbon tax introduced by the federal government. [Photo © Jennifer Liu]
Business

The federal government’s carbon tax came into effect across Ontario on Monday.

The levy was also put in place in Manitoba, New Brunswick and Saskatchewan.

For motorists in Ontario, the levy adds 4.4-cent tax per litre of gas. The federal government will send a rebate cheque to individual households. Most Canadians will receive a higher rebate than what they pay out in charges. According to the Pembina Institute, the average Ontario household will receive $300 in 2019, offsetting the average carbon pricing tax amount of $244.

To test the reaction of Ottawa drivers, Capital Current visited a gas station in Nepean to gather opinions on the impact of the levy on motorists’ wallets and the environment between 8 and 8:30 a.m.

“I feel as though the government is gouging us to no ends, and I feel like this is just another area that they’re doing this,” said one driver, who would only give her first name of Michelle.

Another driver said the carbon tax will also apply to businesses he believes will offload the charges to their customers.

“I think it’s pretty much going to affect every bracket of our society right now,” said Nigel, who also withheld his last name. “It’s not great that (the federal government) is charging us more money.”

Others were more accepting.

“I’m pretty much OK with paying an extra 4.4 cents for it, for the most part,” said Scott, a pickup truck driver, “as long as it’s not excessive and they do something useful with it.”

The attendant at the gas station said it was business as usual on Monday. He said that the choice to maintain a car is still in drivers’ hands.

“Look it – it’s four cents a litre. If you fill up a full tank, how much will you be saving (before)? Maximum a dollar. It’s not like a huge saving.”

The attendant said he believed the negative talk about the charge is “only propaganda.”

ICYMI: Ray Noyes has been feeling particularly isolated during the pandemic, as he can't afford internet. “Living… https://t.co/mIFcPeT0Qh

ICYMI: Listen to our latest podcast where we go VTS of reporting on Pride celebrations this past June and how exper… https://t.co/2QMbxt5kqI

ICYMI: The Canadian War Museum offers a unique perspective on day-to-day activities of Canadian service women in a… https://t.co/Z6Nja2p0hu

ICYMI: The Ottawa Art Gallery kicked off their re-opening after 3 months with a special event for frontline health… https://t.co/zDsTHJwMcQ