6 days ago 0 6 min read
We use cookies to provide a personalized experience for our users. By continuing to browse this site, you give consent for cookies to be used.
Got it!
Home > Sports > Three Carleton soccer players taken in 2021 CPL-U Sports Draft 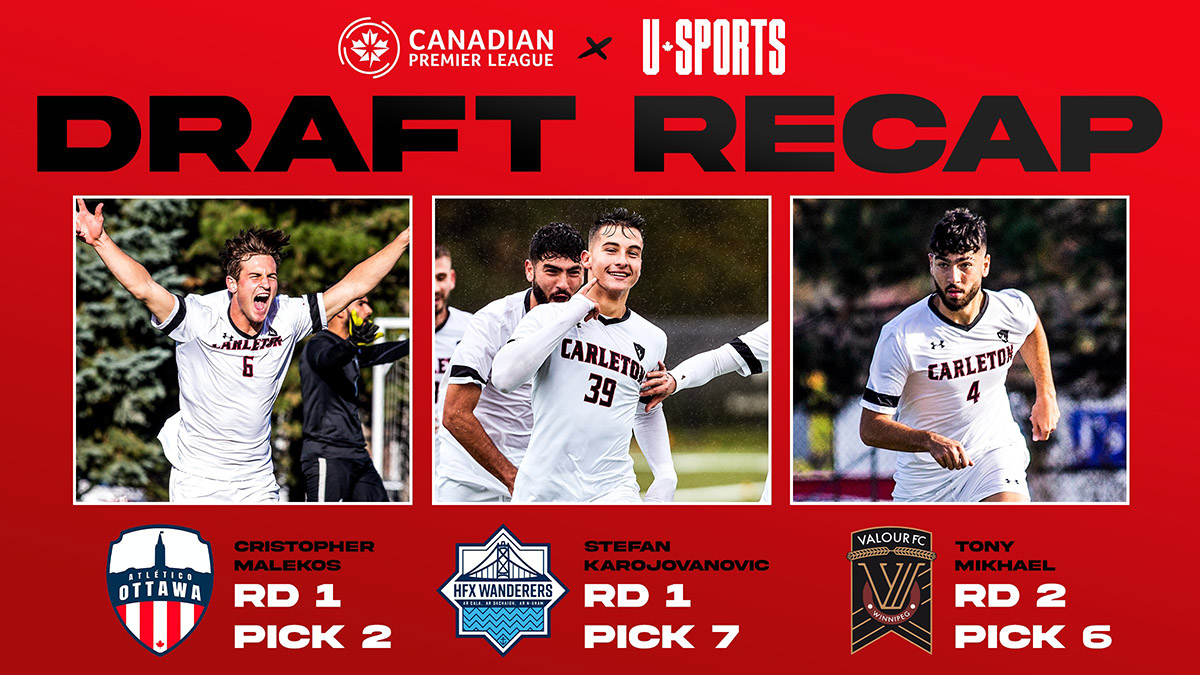 COVID-willing, this spring three Carleton Ravens soccer players will begin to live their dreams of playing as professionals. The trio were selected in the 2021 Canadian Premier League (CPL)-U Sports Draft on Jan. 29.

Centre-back Cris Malekos and striker Stefan Karajovanovic went in the first round. Defender Tony Mikhael was picked in the second round.

In the days leading up to the draft, Malekos was on-edge. “I was feeling pretty nervous the whole week,” he told Capital Current.

On draft day, Malekos, 22, invited two close friends to keep him company, but they didn’t have to wait long.

When his selection was announced, Malekos said the cheering in the room was so loud he needed to rewind the video to hear it again.

“It’s a crazy experience and definitely a lot of pressure,” he said. “But I love pressure and I want to do the best for the city, for the club and to represent my school as well.”

“It was an honour, for sure, being the first pick for the club of your hometown,” Malekos said.

Mikhael, 20, was at home with family in Ottawa when he was selected in the second round, 14th overall by Valour FC out of Winnipeg, Manitoba

“It was an amazing moment,” Mikhael said. “To share it with my family was beautiful.”

The last 11 months were difficult for Mikhael. In March he underwent surgery to repair a fractured bone in his foot. It took six months to return to soccer activities.

“I feel like this year I was seriously tested,” Mikhael said. “My patience, my trust, my faith, all those things were tested.”

His hardship made draft day even more rewarding.

“I feel like that moment when I got drafted was definitely extra special because of all the things I went through last year,” Mikhael said.

Stefan Karajovanovic, 21, was picked seventh overall by the Halifax Wanderers. He, like the other Ravens draftees, gave lots of credit to Carleton’s training for his success.

“The program is put together very well,” Karajovanovic said. “We have a lot of people that take care of us and we have an amazing alumni that is there for us every game.”

Being drafted to the CPL is an incredible achievement, but it’s just the first step, he added.

Karajovanovic – who was picked by York United FC in the 2019 CPL Draft but not offered a contract – said he’s looking forward to a fresh start.

“I’ve just heard great things about Halifax,” he said. “The city, the fans, the coaching staff I heard is unbelievable.”

“The next step is just earning that professional contract that I’ve been dreaming about since I was a little kid,” Karajovanovic said.

Malekos – who last played a game in August for Ottawa South United – said he’s most excited to return to a pro soccer environment.

“It’s been so long,” Malekos said. “I miss the game I’ve been playing all my life.”

“The next month is about working my ass off to be as ready as I can be for whenever training camp comes,” he said.

The start of the 2021 CPL season will depend on COVID-19 restrictions. Training camp is expected to start in April and the season is tentatively scheduled to begin in May.

Because of COVID-19, the CPL was forced to condense its 2020 season into a month-long tournament in Prince Edward Island called ‘The Island Games.’ Forge FC defeated the Halifax Wanderers to win the championship.

Lookahead '21: An Ottawa organization is seeding change by helping farmers around the globe